The combined knowledge and experience of The Poppy Factory’s female staff and supporters are vital to the success of our operation, with women making up five of our seven executive team members. This International Women’s Day, we asked three of our key people how being a woman has helped or hindered their career, and what drives them to help veterans with physical and mental health conditions into sustainable and life-enhancing work.

Deirdre joined the Army at the age of 23 and spent over 16 years in a number of specialist roles. Juggling postings with the needs of a young family proved difficult and led her to leave the job she loved. She is passionate about creating new opportunities for women in the Armed Forces and for those who have subsequently left the Services.

“I joined the Army because at the time, the Royal Navy did not employ women on board their ships. I remember attending a naval careers presentation as a schoolgirl and thinking how unfair it was that the same opportunity was not available because of my sex.

“I was the first woman commissioned directly into my Corps rather than into the Women’s Royal Army Corps. During officer training at Sandhurst, training was still in a transition phase. One minute we were handling weapons, planning section attacks and jumping in and out of helicopters, the next we were sat in lectures on etiquette, how to dress and what length of hair was acceptable! These days, training is much more integrated with women operating alongside men in every respect.

“I loved my job and my work was judged mainly on merit rather than gender. Nevertheless, there was almost always a complete absence of influential women in my field; simply not enough women in positions of power for it to feel like there was someone to turn to or to make a difference in terms of setting new and more forward thinking policy.”

“When I attended the Advanced Command and Staff Course, I was one of only a handful of senior women on a course comprising over 300 senior men.

“I wish the career structure had been viewed through a longer lens whereby women could take work breaks and reduced-intensity postings when it was really needed. Almost twenty years later, I am really pleased to see that the Army has started to introduce flexible working.

“Celebrating International Women’s Day is really important and we should champion both the women and the men who have help make a difference. The full potential of women has yet to be realised however and therefore we should all keep trying to provide as much equality of opportunity as possible.

Dr Sri Kalidindi, Consultant Psychiatrist in Rehabilitation and trustee of The Poppy Factory

Sri joined The Poppy Factory as a trustee in 2018. She is a Consultant Psychiatrist in Rehabilitation at Maudsley Hospital in London and is the national clinical lead in NHS Improvement for Mental Health Rehabilitation. 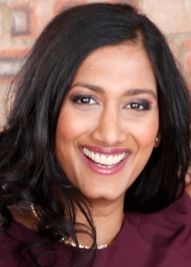 “I come from a medical family and from a young age, I knew I wanted to be a doctor. As a woman coming from a BAME background I saw medicine as a way I would have slightly better odds than if I had gone into another profession like law.

“Practicing psychiatry allows me to spend more time with patients supporting them towards their recovery. It is a joy to see people reaching their goals in life and living as independently as possible, even with a serious mental illness.

“There are many amazing women role models who I look up to, in medicine and wider society. My mother is an amazing woman, who has always encouraged me to pursue my dreams, including my career goals. Even now she provides my family and me with so much love and practical support. Dr Geraldine Strathdee, The Poppy Factory’s Vice Patron, has also been a particular role model.

“It is an absolute honour to be a Poppy Factory trustee. Ensuring that veterans who have put their lives on the line for us are supported back into paid work is such an important outcome. Not just for the veteran, but for their families and for wider society.

“By highlighting the achievements of women, the hope is that other women and men will have role models who give the explicit message that women do succeed in the most senior positions. Advocating and supporting future generations of women to succeed and surpass us, is an essential part of our roles. Women make up half the world’s population and by holding them back, we hold back our collective progress, in every country and as a planet.”

“International Women’s Day gives us all an opportunity to think about these issues and most importantly, take action towards developing the hugely untapped and often stymied potential of women globally.”

Jackie Graham, volunteer and former welfare officer for veterans and their families

Jackie has been volunteering at The Poppy Factory for over three years. She joined the Queen Alexandra Royal Navy Nursing Service (QARNNS) as a Clerical and Quarters Officer in 1976. She worked for six years at the Royal Naval Hospitals Plymouth, Gibraltar and Gosport caring for nurses, before spending 15 years working with families of Service personnel as a welfare officer for The British Legion’s Women’s Section.

“I wasn’t from a military family and joining the Forces wasn’t something I had considered. My grandad was a doctor in France during the First World War and my mum was a pharmacy dispenser who spent time working at the Duchess of Kent Military Hospital Catterick.

“I trained in catering at college and when I finished, I got a job in an office. A lady I worked with was looking for a new job and showed me the adverts in a magazine and I noticed one for the QARNNS.

“I’m terribly patriotic and I loved serving my Queen and country. I have always been inspired by Edith Cavel, the British nurse who was court-marshalled and shot for helping save the lives of British, French and German soldiers during the First World War.”

“My job as a welfare officer was very satisfying. Quite often the wives and widows of serving personnel were not getting sufficient funding from the state, so it was down to the women to fill out application forms requesting funds to The Royal British Legion’s Women’s Section.

“It was my job to write to them if I’d be able to identify more money that they were entitled to. I’d always get the most wonderful letters back from women we’d been able to help.

“Six months after finishing as the manager of a retirement home, I came to The Poppy Factory as a volunteer. I live locally and I knew of their important work so I said I was happy to do anything they needed me to do.

“There are millions of women across the world who are doing what they can to support others. I think it’s very good to give back and help, to give thanks to those who have lost their lives so we can live as we do.”