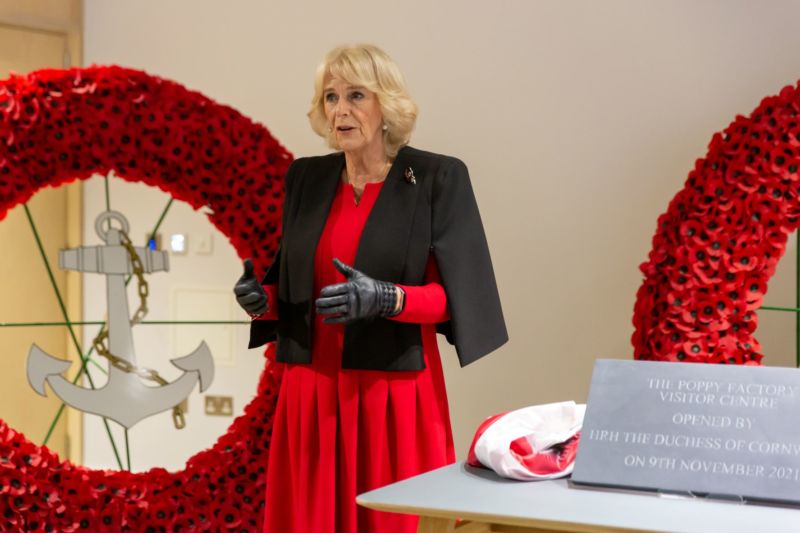 The Duchess of Cornwall, Patron of The Poppy Factory, added the finishing touches to The Prince of Wales’s Cenotaph wreath and her own Remembrance cross during a visit to open the charity’s new facilities and visitor centre.

Her Royal Highness, who is due to place the custom-made cross at the opening of the 93rd Field of Remembrance this morning (November 11), met members of the production team who have been working year-round to create Royal and regimental wreaths at the Richmond-upon-Thames site. 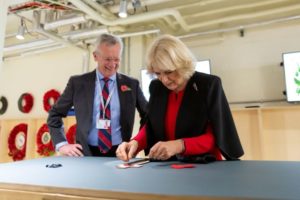 The Duchess also met supporters of The Poppy Factory, those who have been involved in funding the refurbishments and veterans who have benefited from the charity’s employment service, which supports ex-Forces communities across England and Wales.

Ahead of The Poppy Factory’s centenary in 2022, Her Royal Highness unveiled a stone plaque to commemorate the opening of the building on Tuesday, November 9.

The full story of The Poppy Factory is told for the first time at the new visitor centre, part of a comprehensive redevelopment that was completed during the pandemic. The refurbishment has created an improved working environment that will support the work of the charity and generate income to help more veterans with health conditions into employment. 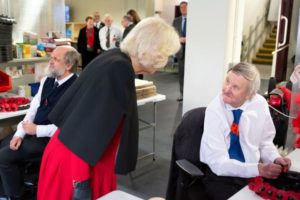 During Tuesday’s event, specialist Royal wreath makers Peter Wills and Paul Hammerton were on hand as Her Royal Highness helped put the finishing touches to The Prince of Wales’s wreath, which he will lay at the Cenotaph on Remembrance Sunday.

Deirdre Mills, Chief Executive of The Poppy Factory, said: “It is a tremendous honour to welcome our Patron, Her Royal Highness, The Duchess of Cornwall, twice in one week; firstly to Richmond and secondly to the Field of Remembrance at Westminster Abbey.

“We are proud of our charity’s continued role in Remembrance, in our work at the factory and in organising and planting the Field. We are similarly proud of our building redevelopment work, which has delivered a modern, inclusive and inspirational space.

“Our production team benefits from a more open and accessible environment, while our new offices allow us to continue providing the highest standard of employment support to veterans with health conditions across England and Wales.  Our new visitor centre will also draw thousands of visitors to The Poppy Factory each year, helping us connect with new supporters who share our vision of a positive future for all who have served in the Armed Forces.”

At today’s (November 11) service at the Field of Remembrance, Her Royal Highness will be greeted by the Dean of Westminster Abbey, The Very Reverend David Hoyle. The Duchess will go on to meet the President of The Poppy Factory, Surgeon Rear Admiral Lionel Jarvis and the Chairman of the Board of Trustees of The Poppy Factory, Alistair Kett. Surgeon Rear Admiral Jarvis will host and escort The Duchess throughout the Service. 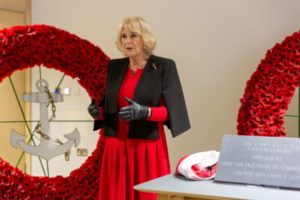 The Duchess will stand in front of the crosses from the Graves of Unknown, where The Dean will offer prayers. The Duchess will then lay a Cross of Remembrance and the ‘Last Post’ will sound. This will be followed by the ‘Exhortation to Remembrance’, and the chimes of Big Ben at 1100hrs. A two-minute silence will be held, before Reveille is sounded at the end of the silence.

Her Royal Highness will then review the memorial plots for regimental and other associations, meeting some veterans and representatives from the Armed Forces. The Duchess will also be invited to sign St. Margaret’s Church Visitors’ Book.

In a nod to a tradition set by HRH The Duke of Edinburgh on occasions when the opening of the Field of Remembrance coincided with Armistice Day, The Duchess will then visit the Grave of the Unknown Warrior inside Westminster Abbey, where Her Royal Highness will lay flowers in remembrance.