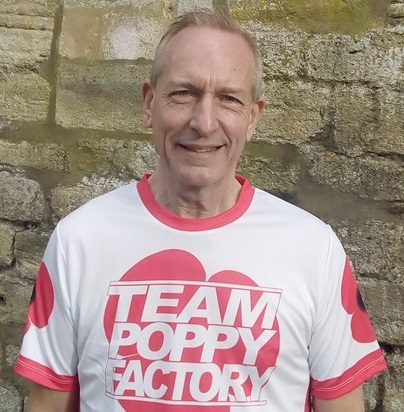 With the London Marathon just six weeks away, training is heating up for Wiltshire resident John Chapman as he gets ready to run in a Poppy Factory T-shirt. 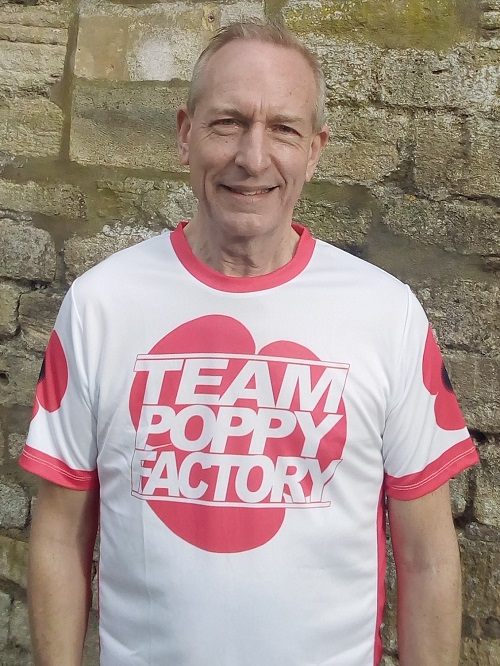 The 61-year-old dad of three has completed the London Marathon before, but this is the first year for The Poppy Factory and he is excited to raise funds to support veterans with physical and mental health conditions back into work.

He was inspired to support The Poppy Factory after becoming aware of the needs of veterans in and around his home town of Bradford-on-Avon. The 61-year-old dad of three has completed the London Marathon before, but this is the first year for The Poppy Factory and he is excited to raise funds to support veterans with physical and mental health conditions back into work.

John said: “I’m passionate about raising awareness of the importance of mental health, particularly as it often affects our veterans. It’s taken a really long time for Britain to switch on to the fact that it’s just as important as physical health.

“In my town is a homeless man who is ex-Forces. He has post-traumatic stress disorder from his time in Afghanistan. He disappeared for a few months and I haven’t seen him to speak to, but I want to tell him I am running for The Poppy Factory and that help is out there if he wants it.”

John is currently training to be a volunteer for Citizens Advice and previously was a stay-at-home dad for 15 years after working at Nationwide for 21 years. He only started running fairly recently, and with weeks to go till the London Marathon, he is warming up by taking on the Bath Half Marathon.

John said: “After leaving school, I didn’t do any exercise until I reached the age of 50. I had an unhealthy lifestyle, and it hit me that I probably wouldn’t live for another 50 years if I didn’t change my ways.

“I started running about 10 years ago and really enjoyed it. The London Marathon is a goal that I’ve had in the back of my mind all my life.

“Running has given me a completely new lease for life and is perfect for improving mental health. As I came to running late in comparison to others, I’ve got fresh knees and I feel so energised. While I’m running I feel like a 20-year-old but then I look in the mirror, and I remember I’m actually 61.”

You can keep up-to-date with John’s training and donate to his fundraising target on his JustGiving page.

Listen to John talk about why he’s running for The Poppy Factory on BBC Wiltshire – skip forward to 1hr 26mins 28s.