Wow, what a year 2018 has been! Not only has it marked 100 years since the end of World War One, but it has also been the year we reached our target of helping 1000 veterans with health conditions into meaningful civilian employment.

From community events and fundraising challenges, to improving mental health in the workplace and celebrating our wonderful volunteers, we have been kept busy.

Here’s a snapshot of some of The Poppy Factory’s highlights over the last 12 months.

We worked with BAFTA nominated production company 104 Films, who recruit young people with disabilities to make interesting films, to record a piece on the history of The Poppy Factory.

In February we received planning permission to renovate The Poppy Factory’s head office and factory once extra funds have been secured. The work will allow us to offer people an exciting new visitor experience while creating a vibrant and accessible working space for employees.

We also had the Leader of Richmond Council, and CEO of London Boroughs of Wandsworth and Richmond come to make a poppy and meet our veteran workforce.

We know better than most employers that having a happy and healthy workplace is key to good mental health wellbeing (and productivity)! That’s why we started talking about positive mental health at The Poppy Factory in March.

Staff tried out a Mii Chi session, which gave people a chance to practice mindfulness and breathing techniques to help reduce stress, and we officially joined Amazon Smile, the online retailer’s donation sister platform where shoppers can make a 0.5% donation at no extra cost of their purchase.

At our annual AGM, we bid farewell to our Chair of five years, Mark Perowne, and said hello to Major General Dr Andrew Sharpe who we were honoured to accept the position and finally, we also bestowed three Howson medals to Trustees Mark Perowne, Hugh Player and Geraldine Strathdee for their dedication and commitment to our veterans.

April marked the half-way point in The Poppy Factory’s financial year (1st October to 30th September). By the six-month point, we had helped more than 130 veterans with health conditions back into work, and registered over 350 people in total. In the factory, we had made 70,000 wreaths and 400,000 symbols ready for the Remembrance period.

We continued to focus on positive mental health in the workplace with staff receiving valuable and empowering Mental Health First Aid training; our very own Nicola from the production team celebrated winning her 100th running race medal and it was also amazing to have Jade and Gavin, two Poppy Factory supporters, running in the London Marathon, raising money for The Poppy Factory.

After a combined 66 years’ service in our production team, Frances and Stephen West, took well-earned retirement. The pair, who met at work, made more than 13 million poppies and several hundred thousand Remembrance symbols over the years.

June saw the launch of our #1000messages campaign during Armed Forces Week. Members of the public were asked to write a supportive message for veterans on their first day of a new job on social media and at a number of events. The campaign helped us to reach our goal of supporting 1000 wounded, injured and sick veterans back into meaningful employment.

The campaign was featured on Sky News, Channel 5 News, regional radio and in a number of other press outlets. At the same time, TV presenter’s Kate Garraway, Richard Arnold, Alison Hammond and Ross King got behind the campaign to help promote us to their following on social media to new audiences.

We also celebrated our 100+ volunteers during Volunteers Week and hosted a spectacular garden party at Trumpeters House in Richmond.

Our Trustees and the Executive team visited the Royal Military Academy Sandhurst for the annual Trustee away day and we held a Picnic on the Green in Richmond for staff and volunteers.

To commemorative 100 years since the end of World War One, in August, seven of our veterans took part in Lord Dannatt’s Round Britain Challenge from Cardiff to London. The adventure on board the Lord Nelson pushed the team to try new things, share skills and spend time back in the company of follow ex-Service men and woman.

We were delighted to accept a £120,000 donation from the Somerset Freemasons. The generous gift has helped us to support 40 veterans back into employment, including Tony, who reached out to The Poppy Factory after having a heart transplant. Also in August, one phenomenal volunteer from Surrey County Council made a whopping 950 poppies in no less than three hours!

To celebrate our goal of supporting 1000 wounded, injured and sick veterans into civilian employment (thanks to our #1000messages campaign), our Patron, HRH The Duchess of Cornwall hosted a reception at Clarence House where she wrote the 1000th and final message.

September also saw ten runners raising over £3,000 in Richmond’s annual RunFest 10K and half marathon events, including Amanda who ran in memory of her grandad, Michael, who loved The Poppy Factory.

Throughout October the factory and our Tour Guides became extremely busy as we geared up for the Remembrance period.

Be Richmond ran an online auction and donated all proceeds (over £2,000!) to The Poppy Factory; acclaimed children’s author, Sir Michael Morpurgo, came to The Poppy Factory to read from his new book, Poppy Field; Shaun and Mike, both veterans of the British Army, recorded a video for World Mental Health Day; and the Invictus Games’ kicked off Down Under.

To mark the centenary of the end of World War One, we ran our 90th Field of Remembrance event at Westminster Abbey with the help from more than 50 volunteers. HRH The Duke of Sussex opened the Field on Thursday 8th November which stayed open for members of the public to pay their respects until the following Sunday. 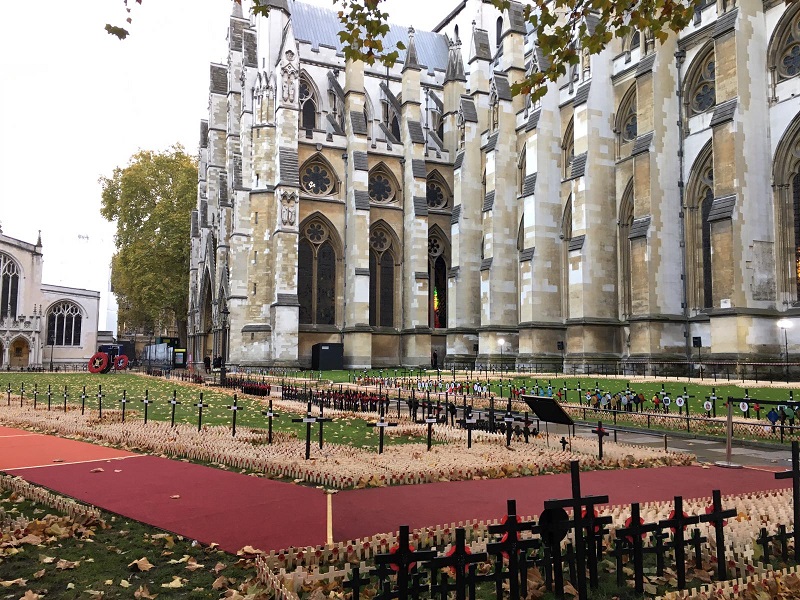 Also during the Remembrance month, we welcomed Rear Admiral Lionel Jarvis as our new President; we team up with The Ivy Café in Richmond, who displayed a beautiful poppy installation and served a stunning poppy-themed afternoon tea; Richmond Rugby Club donated over £2,500 to The Poppy Factory from their annual fireworks display; we kicked-off our Christmas campaign – Working with PTSD – and our very own Shaun starred in the acclaimed West End hit, Soldier On.

Just when we thought things would start calming down in the run up to Christmas, we were honoured to be awarded The Freedom of the Borough, the highest award a council can bestow; five of our veterans and their partners were treated to a night at the theatre thanks to The Invictus Games Foundation and we celebrated our successes in true Poppy Factory style with our Christmas party.